Groove Commerce Flat Design: It isn't a fad; it is the present and future of interaction design.
July 23, 2013

As web design slowly catches up to what the world of print design already knows as "good design" we are seeing a lot of great trends that are sure to become best practices. It is not easy to spot what's a new trend versus what is a fad, but if you choose wrong you'll soon realize why fads inherently fade away; trendy is not always good design. Good design is timeless and just works. 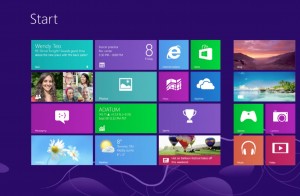 Currently we see the industry, fortunately, pulling away from the skeuomorphic era. A skeuomorphic graphical user interface (UI) emulates objects in the physical world. For example, the bookshelf in the Books app for the iPhone/iPad, or for a real world visual: the fake wood on the side of old station wagons. This also includes buttons that look like candy and backgrounds that try to look like parchment paper. Design is moving toward a minimal user interface for many reasons. One, it just works really, really well. Organizing content in a smart and logical manner while removing any unnecessary decoration improves readability, the user's ability to scan the page, and ultimately improves conversions. If we look back at the golden age of Swiss design we know that good, clean, minimal design is a design style that is timeless and successful. Swiss design is also built on a grid system and with good web sites built on a grid - it is a natural fit. We also know users want a simple, intuitive experience where content isn't distracting and UI elements make sense.

Another important aspect is performance. Performance REALLY matters, especially with a responsive design. When you consider mobile devices, tablets, desktops and laptops, and even smart TVs you need a design that works well on all of these machines. Skeuomorphism worked for a while (fad) because majority of users were on desktops with high speed Internet. Now that it is a near 50/50 split with mobile and desktop, better design and better performance becomes necessary. This movement is called Flat Design. And it isn't a fad; it is the present and future of interaction design.

If we look at the latest operating system from Microsoft we see a gorgeous, simple flat UI. At Apple's latest keynote, they revealed the next iOS, which takes a huge step away from skeuomorphic UI and moves toward totally flat UI. And it is not just these two big tech firms that are going flat, Twitter Bootstrap, Facebook, and Mailchimp are just a few other big names using a flat UI. Some of the criticism of flat design is that it is too simple and minimalistic. But when you consider the medium interaction designers are designing for, interaction and usability are just as important as aesthetics. The simplicity of flat design is not a reflection of the effort it takes to deliver such a product. For example, it is easier to write 250 words explaining your business, rather than in just four words. The same effort is required to execute flat design well. My fellow designers cringe at the thought of the most recent fad of web design: candy-coated-gradient-filled-drop-shadowy awfulness.

In the short 20-year history of web design we have suffered through sites that are either over designed or not really designed at all. With the flat design movement web designers can focus less on trying to “wow” users with over-designed sites and concern themselves with creating great experiences and allow the amazing content be the wow factor. Less is truly more in design. Flat design is the way to high converting, high performance, and sexy web sites!