Groove Commerce Magento 2 has taken off and, for the first time since its rumor in 2010 by then CTO Yoav Kutner, is in flight. The 2016 Magento Imagine conference spared no details when unveiling the next iteration of the world’s most popular open-source ecommerce platform.
April 28, 2016

Magento 2 has taken off and, for the first time since its rumor in 2010 by then CTO Yoav Kutner, is in flight. The 2016 Magento Imagine conference spared no details when unveiling the next iteration of the world’s most popular open-source ecommerce platform. A lot has changed...and a lot of speculation has been put to rest.

First, a little background. Through 2015, Magento 2 spent much of its time in developer and merchant beta stages. It debuted for general availability in Q4 of last year when we could get our hands on an official copy. But not until Imagine did we truly see some of the results of in-the-wild developments, where the early adopters have bravely become what Jaime Clarke (CEO of LiveOutThere.com) and Mark Lavelle (CEO of Magento) describe as “trailblazers.” 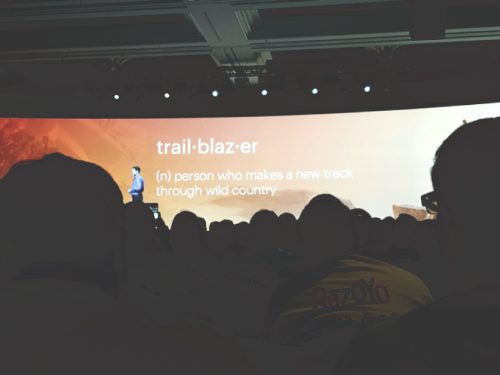 A hot topic at the Imagine conference, through both technical tracks and general keynote sessions, was performance. Historically, Magento has required some fine-tuning to make it soar, which has left something to be desired for many merchants. Magento 2 boasts huge improvements in this arena out-of-the-box, but some early benchmarks (including this one) originally put Magento 2 at a disadvantage over its predecessor.

But what the tests don’t account for - and early adopters at Magento Imagine did - is real-world application. Early adopters present at Imagine this year overwhelmingly endorsed Magento 2 for its speed improvements.

In the technical tracks, some great benchmarks were provided. The Magento 2 team has defined scalability as the criteria for a fast website, and they spelled out four areas that were improved for better performance at scale: 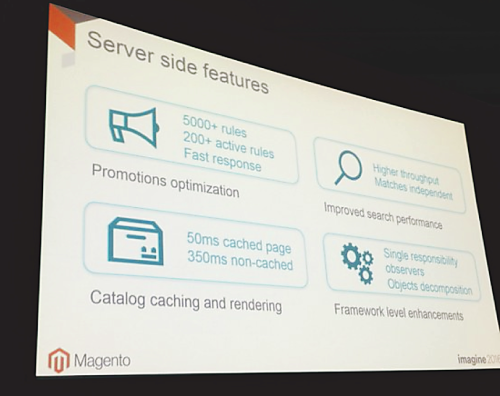 You don’t have to be technically-minded to understand most of these improvements. Magento 2 outpaces Magento 1 in capacity, and much of the credit for this goes to its completely re-developed architecture.

It’s also important to consider the perceived performance of a website. To this challenge, Magento 2 has risen to stack some impressive marks against its predecessor. Leveraging well-known page speed test services like WebPageTest, PageSpeed, and YSlow, Magento 2 has seen improvements across the board.

Dispelled Rumor #2: Magento 2 Was Too Slow to Market, Is Not Utilizing Advanced Technologies

Magento 2 ships with a completely re-built architecture, which is one reason we waited for it. This means merchants and service integrators can take advantage of more modern technologies, including Composer, LESS, Grunt/Gulp, jQuery, RequireJS; and the application conforms to newer PHP-FIG standards like PSR-2/4. This equates to a more familiar development experience that better unifies the Magento platform with the broader PHP community.

Magento 2 also ships with unit testing coverage. Unit testing ensures that for any changes made to an application, all other systems continue to function as expected. In Magento 1, there was no official test coverage. Now, Magento 2 ships with some impressive unit test stats:

This means integrators will become more reliable when building on the platform; it also enables them to operate under continuous integration practices. This is a huge win for merchants because they will experience a greater consistency in successful deployments and iterations of their business.

This year is proving ground for Magento 2. With over 250,000 merchants in the Magento ecosystem, they have a huge reputation to protect. By dispelling the rumors at Imagine 2016 surrounding the product, Magento is hoping that more merchants will make the transition to Magento 2 and encourage others in the process.

If you’re considering a Magento 2 replatform, we’d love to discuss it with you in more detail! Contact us to chat with one of our Magento experts.